Bobotie (pronounced ba-boor-tea) is a South African dish consisting of spiced minced meat baked with an egg-based topping. It's a very old South African dish with probable origins in Indonesia or Malaysia. The name derives from the Indonesian "bobotok," and the dish was likely adapted by Dutch traders and brought back to the region around Cape Town. Every South African cook has his or her own favorite version of this dish, some very simple, others quite elaborate. Bobotie is typically served with yellow rice and a side of mango chutney.


I've been aware of the dish just a few weeks ago when I saw it posted on somewhere that I couldn't recall (not the first that this kind of thing happened to me..lol)! And although I'd left it unattended for some times but fortunately,it found its way to my mind the other day just the right time when I was thinking of what to serve as our Saturday dinner..so I did a quick search about it and found some recipes that seem to suit my preference.


As always, I picked few recipes from different cuisines and let my husband decide what he would like to be served. He had a quick look through all recipes I presented and for some reason ( that I didn't bother to ask why!)he opted for the bobotie which I was very happy with his choice!


However, I was worried a bit about the custard-like topping..without an experience on the dish, I couldn't help but wonder how this egg-based thing could get along with the spiced meat. Despite a concern, I decided not to leave it out and simply followed the recipe I chose ( with a slightly change though !).


After the first spoon, my doubt was totally gone exactly at the same time as a pleasure came..:) The yellow rice served along made us enjoy our meal even more ! So see you, bobotie, on our dining table again sooner than rather!! Bon appetit..


Here is my version (slightly adapted from here):

Heat oil and fry onion, ginger and garlic for about 2-3 mins, or till the onions turn soft.


Add the mince in 3 batches, frying after every addition so as to break up the lumps. Once the mince is evenly browned, add in the spices, curry powder, turmeric powder, cayenne pepper and salt. At this stage, you will notice that the mince has released some water; fry for another 7-10 minutes or till all the water has almost dried up. Turn off the gas. Then, stir in the chutney, raisins and the lemon juice.
Squeeze the milk out of the bread (retain this milk for the custard), mash the bread with your fingers or a a spoon and stir it into the mince. The bread binds the mince together and also keeps it moist.At this point, adjust all the seasonings to your taste and transfer the mince into a baking casserole.

Beat the eggs along with salt and pepper. Add the milk to the beaten eggs - use the milk you soaked the bread in and add as much more as needed to make 1 cup - and beat again to mix the eggs and the milk well.Pour this mixture over the mince. Arrange the bay leaves on top of the egg mixture and bake uncovered at 180 deg C for about 30-40 mins or until the egg mixture has set.
Cut into individual portions and serve with some steamed vegetables and yellow rice. 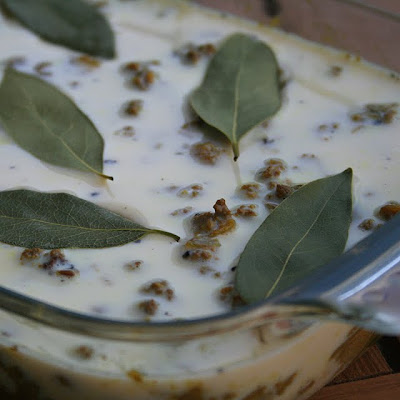 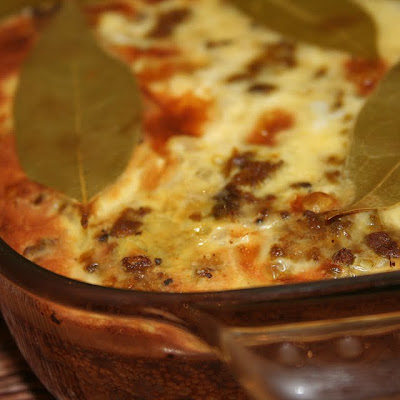 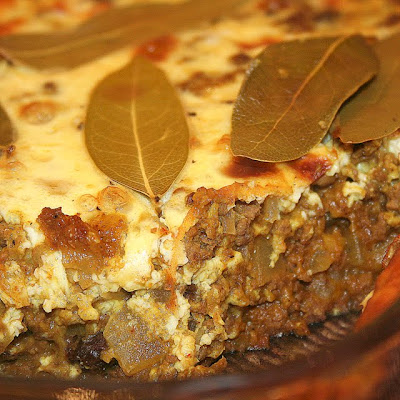 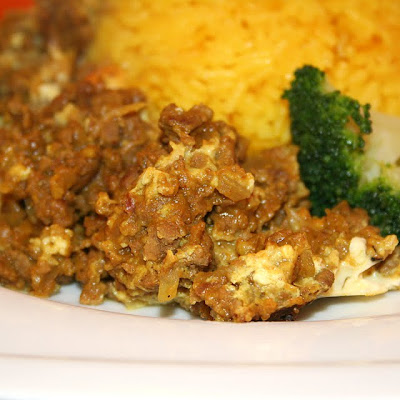